It Never Rains In Southern California  ………….

END_OF_DOCUMENT_TOKEN_TO_BE_REPLACED

Say  what you will about  defending a championship as there’s often the belief  that once  having  won one  it’s extremely difficult to come back to try and defend and retain the said  championship.  But it’d appear that’s what the Boston Celtics  are setting out to do this year.  So much so that the start and  stats  that they’ve  proceeded to put up are  even more staggering than last seasons.  They’re now on pace to exceed last season’s tally of 66 wins.  Infact that they’re  now on pace for 74 wins that’d best  the  Chicago Bulls’ 72-10 tally at the  height of when Michael  Jordan reigned supreme. 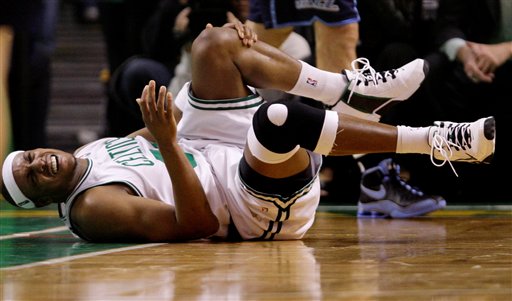 Paul Pierece grabs his left knee in pain having injured it  during the  game played  against  the Utah Jazz. picture appears courtesy of ap/photo/Paul Matthews ………..

That being said this team with their triumvirate of stars in the guise of  Ray Allen, Kevin Garnett and Paul Pierce now seem to have added an even greater swagger to their  role as champions. The team’s  play is one of confidence night in and night out since  this season has started. And  the fact that they now sit atop of their division with a commanding 10 game lead over their nearest  rival  the New Jersey  Nets within the Atlantic Division. It’d suggest that the team hasn’t  missed a beat since its defeat of the Los Angeles Lakers in last season’s NBA Finals. At 23-2 the  team as alluded to before is playing with a great  deal of confidence and it has to be said  has come  with the improvement in the play of sophomore point guard Rajon Rondo.  As of late the player has been on  a tear that has  impressed  not only his coach  Glenn Doc’ Rivers  but also  his more studious and experienced  teammates as well.

Rajon Rondo of  the Celtics  and  Deron Williams of the Utah Jazz contest a loose  ball during the  game  played  on Monday night.  picture appears courtesy of ap/photo/Paul Matthews ………………..

Rondo commands the floor  with a great deal of presence and no longer would it appear that the leadership role on the floor has  to go through Garnett or Pierce with everyone else  having to defer to them both in terms of the team’s offense. Rondo now has the confidence in his own ability and  that of  his  teammates around  him that he makes the right decisions  when it  comes to the distribution of  the ball and  the aspects of  the  team’s offensive strategies. Rivers,himself  has expressed his pleasure  in the player’s seemingly progress and maturity  shown not  just  on the basketball court  but  also off it as well. So much so that the feeling  is that the player can become the lynch pin of the team’s success  for years to come and that the franchise  can also profit  from it all. Say nothing of which in repeating as champions they  would become to  the toast of the New England area.